Fred Stolle was an incredible player in the 1960’s reaching 8 Grand Slam singles finals, winning two of those – Roland Garros in 1965 and the US in 1966.

If you’re looking for a trivia question, Fred is the only male player to have lost his first five Grand Slam finals!

Fred is based in Miami Florida with his wife Pat. He’s keeping fit with a few hits of tennis and plenty of walking. He keeps in touch with his tennis mates Roy Emerson, Owen Davidson, Mark Woodforde, Rod Laver and many others on a regular basis. He’s lived a full life beyond the tour with coaching, corporate tennis work, and decades as a sought-after TV commentator.

Since 1960 he’s only missed going to Roland Garros a few times, so that’s a lot of visits to Paris for the great claycourt Slam!

He won the singles in 1965 as well as the doubles with Roy Emerson, the man who had beaten him in 3 consecutive Grand Slam finals prior to 1965 Roland Garros! In 1968 Fred took the French doubles title again, this time with Ken Rosewall.

Fred was to be in Paris this week for the 2020 edition of the French for the ITF Champions Dinner.

FRED spoke with IC Beyond the Tour:

BTT: Fred, are you missing being at Roland Garros?

To a point, I had my first Grand Slam win there, after five (grand slam) finals, that was the 5th and on clay that one was pretty much unexpected!

BTT: This week in Paris you were to be awarded the Philippe Chatrier Award for your contribution to tennis at the ITF World Champions Dinner?

Yes….It would have been tonight! So I had both my daughters coming and (wife) Pat coming, so it would have been very nice….the Philippe Chatrier Award is very special and Philippe was a very nice guy and instrumental in doing a lot for tennis…. In the early days he was battling to get the French going.

(expanded the site, added courts and grounds) He fought the city for years and years before he got to build it and now they’ve had to do that once more to get the area at the other end so they could put the stadium in with a roof on.

It’s a great tribute to Philippe that the centre court is named after him.

(BTT note: Fred is joint recipient with Manolo Santana, the first Spaniard to win Roland Garros in 1961. It was such an emotional win, the story goes that Manolo wept for an hour afterwards! The Spaniard won there again in 1964, was US winner in 1965 and Wimbledon champion in 1966)

BTT: So are you raising a glass of red for your award?

BTT: What do you think will happen with re-scheduling US Open and Roland Garros?

I think the whole year’s shot to pieces….the US could lose about 400 million, if no French they stand to lose about 300 million so that’s a lot of money… to lose out of tennis.

BTT: Do you think there’ll be big changes to tennis out of Covid, talks about merging tours?

Not a lot, but I wish I could say yes but you know the politics of the game! I thought it was a great opportunity to get together and get something done.

I’d put the WTA, ATP, ITF and the 4 Grand Slams in a room and I’d give them a Covid type quarantine and say “stay in there until you get this thing done and come out with something that will work for everybody!” But as we know, you get division and it’s just not going to happen.…some of my favourite years were when we had both men and women playing together on the tour and it worked, but in this day and age, because of prize money and the rest, it’s not going to work.

They’ve all got to get on with one another and come to some sort of agreement, a formula where they are both happy with what they get.

I think if they’re realistic they can come up with a solution that works for everyone.

The Grand Slams have to give something … an argument that the WTA and ATP should have more of the TV revenues, but that’s probably not going to happen.

BTT: How tough do you think it is for players at the moment?

Oh, very tough, they’re used to training, routine, this has thrown everyone out of whack. Most have gone home or to where they train, if they’re able to train. It’s all stymied and they can’t do normal things…Nadal says he hasn’t touched a racquet, ha! Good luck to him, he can’t get out there and win! Well, maybe he can!

BTT: What has the IC meant to you over the years?

The IC to me is very special. It’s something I feel strongly about, where, say the IC of GB play IC France, IC Aust go to NZ, I think those matches and trips are great especially as you get older.

I’m glad you’re getting some of these young guys like John Millman involved and Sam (Stosur) will do a good job to say “hey, this is part of what made you what you are.”

It’s true! The IC did a helluva lot for us on the tour as amateurs a long time ago…  I think Roy Emerson and I were members of about 21 different IC Clubs because when we played the tournament and we got a free dinner and a tie! But we believed in it and the concept! And you met all the older players, the ones who came before you! You met Philippe Chatrier, you met Borotra and you met the great Americans you looked up to coming through the ranks. And it was special, you’d talk to them but now maybe they don’t want to do that.

I hope that TA recognize the fact the IC has been around as long as they have or longer and hope they recognize they’ve had some great people involved… Sedge, great Australians who believe in it, and there should have been more folks after that generation of Laver, Fraser, Emerson…Ashley Cooper and those boys, Ken Rosewall, and we all went to the dinners and supported it and I believe that should have continued on.

Thanks for talking to IC Beyond the Tour Fred and congratulations on the Philippe Chatrier Award! Stay safe in Miami and look forward to seeing you soon in Australia! 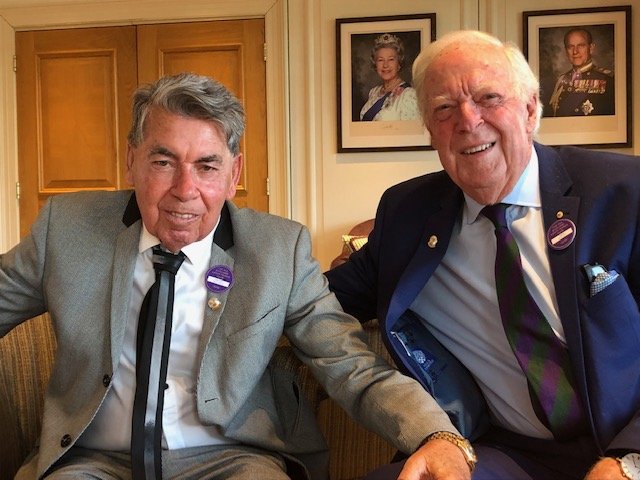